Locations in Midlothian and Farmville, VA

Babies have a natural tendency to suck whatever is placed into their mouths. Objects range from thumbs, fingers, pacifiers, liquid-filled bottles, and various other objects. A commonly occurring problem in infancy is that because sucking the baby bottle calms the child, and sweet fluids further pacify the child, caregivers are often influenced to let the child suck a baby bottle with sugar-containing liquids in it such as fruit juice, baby formula, or milk. The result of prolonged and unrestricted sucking of a baby bottle with sugar-containing liquid in it is often rampant, uncontrollable dental decay — also called “baby bottle syndrome.”

It is suggested that caregivers provide non-sugar containing liquids for babies until the child is capable of using a cup. Avoid training cups that have no-spill valves in them, which are very similar to baby bottles and require sucking. Instead of using no-spill cups, cups with a weighted base to reduce spills are more appropriate. Limit use of sugar-containing liquids to mealtimes, and don’t give your baby a bottle to fall asleep with.

“Baby bottle syndrome” is a serious condition that can have long-term consequences. Avoid it by using the preceding simple suggestions. 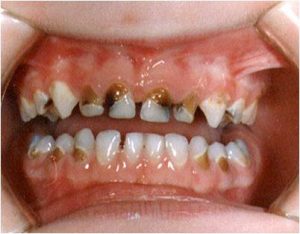